A tropical, fibrous-rooted perennial plant forming an open rosette of erect and semi-erect leaves; mature plants producing new rosettes and forming small compact clusters of leaves elevated just above the soil surface. Basal portion of each rosette forming a bulb-like arrangement which is the accumulation of fleshy leaf bases. Active leaves are generally covered with appressed, white hairs, some of which bear a few very scattered small spurs. Plants from wet habitats have petioles sparsely covered with appressed hairs but in dry conditions, these same plants are covered with hairs. Plants from drier regions generally have petioles covered with hairs for most of the growing season.

Leaf lamina orbicular, 3 mm diam.; retentive glands around margins of lamina; smaller glands within; lower surface covered with long, appressed white hairs, the hairs simple or bearing a few very small alternate spurs; petiole narrowly oblanceolate, 0.5 mm wide at the base, 2.5 mm wide near apex, narrowed to 1 mm wide at the lamina, up to 2.5 cm long at flowering, both surfaces sparsely or densely covered with long, appressed white hairs, similar to those on the abaxial surface of lamina.

(including inflorescence) 10–18 cm long; scape covered with hairs similar to those on leaves but not 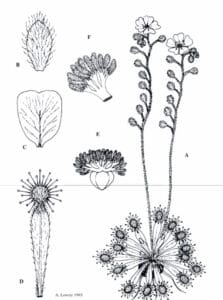 HABITAT: Grows on damp sandy flats near sandstone outcrops, in the sand in eucalypt savannah woodland and in the sand over laterite in open woodland.

Drosera dilatato-petiolaris sheds its above-ground parts in the dry season. In Darwin,I have seen it producing new leaves and flowers with no evident soil moisture in October. The isolated, very localized showers of rain that occur at that time, as well as the humidity during the build-up to the wet season, appear to trigger these plants from dormancy into active growth.